A Word To The Wise In Time Of Conflict

Wise words in time of conflict:

To look for peace is unwise while treachery blinds the soul of the enemy.

"Give your trust sparingly and only to those who have earned it".

The Dangers Of Today's Demagoguery
To The Political Fabric Of Our World.

Beware of Fascism and do not overlook
the importance of your vote.
Never in the history of the world has it been more important to exercise the franchise than in these present times. Practically all over our planet today the marching feet of demagoguery is rampant. Many of the likes of these Demagogues would put Hitler to shame. It is hardly necessary to name these
Demagogues as they are all well known to us.

Such is the danger to world peace of some of these leaders who tend to only continue to spawn their own likes.
To those of you who take the view that "how could my vote make a difference?" I would remind you of the many leaders who are prepared to exploit any chink in the armour of politics to take over or retain power despite the popular will.
Let us not forget the old adage:
If your leader tells a lie big enough and keeps repeating it, people will eventually come to believe it. The lie can be maintained only for as long as the people remain in ignorance of the consequences of the lie.
For this reason facts matter, truth matters and the ability to discern the difference berween truth and lies matters. We should also not forget that in the end character matters.

Email ThisBlogThis!Share to TwitterShare to FacebookShare to Pinterest
Labels: beware of fascism, character matters, Demagogues, Hitler, how could my vote make a difference?, popular will, truth matters, world peace

Mary T Keane and her son Liam were invited to afternoon tea in Lismore Castle by Lord Burlington, heir to The Dukedom of Devonshire.

Mary decided a number of years ago to write a book about her ancestors Clan Callaghan and unwittingly was led into further research on the Clan. Her subsequent book resulted in the publication of The Royal Blood of Erin, The Milesian Irish and Clan Callaghan, go to: marytkeane.com/store A copy of the book is now available in the World's largest library i.e. The Library of Congres, Washington D.C.

I made this video with my Mobilephone while for waiting for the Limerick train at Heuston Station a few years ago. I understand that the Christmas Choir consisted of Coras Iompair Eireann staff members.

Email ThisBlogThis!Share to TwitterShare to FacebookShare to Pinterest
Labels: Christmas 2021 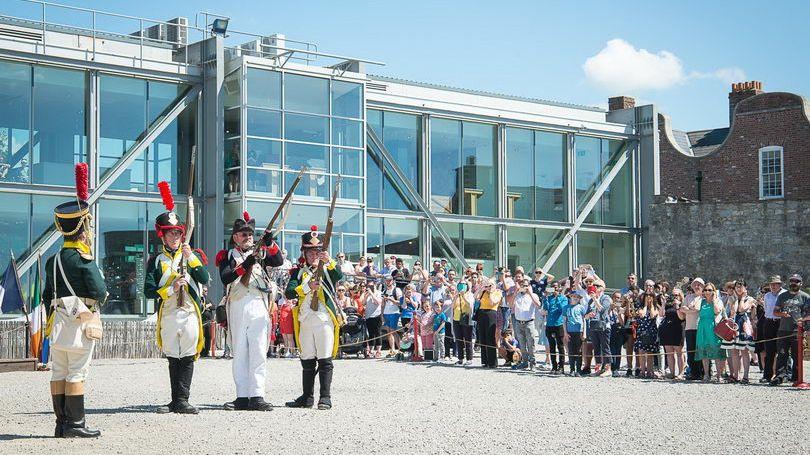 Limerick will celebrate Bastille Day, marking the 330th anniversary of the Flight of the Wild Geese, with a weekend-long event involving a French market, concerts, visual displays and a regatta from 9th – 11th July 2021.

Organised by Limerick City and County Council and the Consular Agency of France in the Mid-West, in association with Shannon Heritage and Alliance française Limerick, the Limerick celebration will feature free family entertainment, a free tour of the castle, displays in the courtyard, a parade, musical performances and historical talks on ‘The Flight of the Wild Geese’ and Limerick’s connections to France.

The term ‘Wild Geese’ had been used to describe those Irish serving in European armies since the 16th century. The historical episode known as the ‘Flight of the Wild Geese’ refers to the 12,000 Irish Jacobite soldiers, commanded by Patrick Sarsfield, who left Ireland for France as agreed in the Treaty of Limerick in 1691 ending the Williamite War in Ireland.  The Wild Geese formed King James’s army in exile but by 1692 were incorporated into the French Army.

Members of the public, and particularly those from the French community living in Limerick, are invited to attend the event which takes place at King John’s Castle on Sunday 11th July 2021.

About the author
Mary T. Keane trained as a teacher and pursued that profession, first in England and later in Ireland. Her abiding interest, however, was in the study of health and fitness. Her lifelong research in natural health resulted in the publication of five books on the subject. The message in this book, her sixth publication on health matters, is 'feel better, look younger, live longer'!

The Countenance is the index......